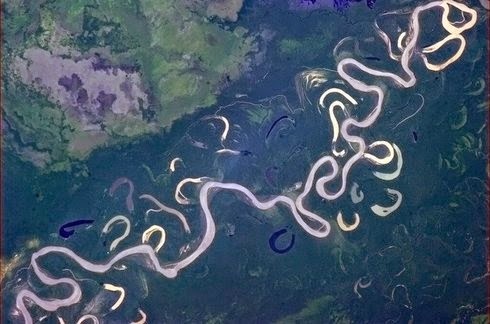 I'll be the first to admit that I was never much of a mathematician. My former math teachers would likely not remember me, and my middle school report cards show striking evidence of D- grades being 'miraculously' elevated to B+ grades with the help of a ball point pen and a little carbon paper... no points for creativity when my parents caught on.

Math is very cool when you can relate it to something you are interested in, and Pi is a very Odd Bird.  Check it out!  I especially like the patterns that rivers make when you look down from an airplane.  I didn't know it before, but "Fluid dynamics" and "Chaos Theory"  are used to explain how rivers get their 'windiness'.   Einstein first described the concept of  'meandering ratios' and the 'windiness' of a river from beginning to end.  Length of the river from beginning to end as the crow flies, compared to the actual length of the river... don't ask me to 'do the math', but Pi is involved in it.

As a number itself, Pi is senseless, irrational, and crazy, with no recognizable pattern.  Odd bird, once again.  I always thought math was black and white. I'm beginning to like this "Mr. Pi'' more and more, with his chaos theory and fluid dynamics...

I guess the only other Mr. Pi I know is Mr. Mark Pi... Mark Pi China Gate, Two Spring Rolls and a Szechuan Peanut Tofu to go... hmmm.